From Oil Lamps to HID Headlights, Things Have Come a Long Way in 130 Years 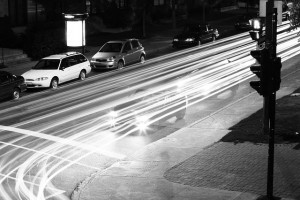 The headlight is an essential element to any vehicle, particularly when travelling by night. This was true before xenon headlights, their halogen forerunners, and even before the invention of the automobile—people riding horse-drawn carriages by night would typically carry a lantern on the carriage to illuminate their way. But while there has always been some way to light up the darkness of the road ahead, it has come a long way. Let’s shed some light on the evolution of high-intensity discharge (HID) headlights.

Let There Be Light

In the 1880s, the first vehicle headlights were introduced. They were powered by a mix of acetylene and oil—both very expensive, and offering little possibility for advancement. It’s no surprise that just before the dawn of the 20th century, they were replaced by the first electric lights. These slowly improved throughout the early years of the new century, though until 1924 many models still needed to be activated from the outside. Talk about inconvenient!

1962 saw the birth of the H1—a halogen lamp designed by a European consortium of manufacturers. It gained popularity in its native continent quickly, becoming mandatory in certain countries, but in the United States, it was actually controversial, and not approved by the Department of Transportation until 1997—after the first xenon-powered HID headlights were already in use! Talk about behind the times.

Halogen headlamps, like their tungsten precursors, are filament lights. This means that an electric current is run through a metal filament until it glows with incandescent light.

Xenon Steps into the Spotlight

So if xenon headlights are the latest in a series of different car headlights, they must be a pretty new technology, right? Well, not exactly. In fact, they may be older than your parents (or even grandparents, in some cases). They just weren’t being used as HID headlights. Instead, they were illuminating something quite different: the silver screen.

Developed in the 1940s, xenon lights were introduced in 1951 by German lighting manufacturer Osram. They were a welcome replacement to the inefficient carbon arc lamp, and are still used today in cinemas around the world.

The 1991 BMW 7 Series was the first automobile to use xenon to light its way. Xenon lights used an electric arc in place of a metal filament to provide more lumens (a measurement of light output) while consuming less electricity, making them more energy-efficient. They also last between 200 and 400% longer than their halogen counterparts on average, making them a serious contender right from the word “go.” Although the materials used in manufacturing them make them more expensive, many automobile drivers see them as the obvious choice for their power, efficiency, and lifespan. It shouldn’t be surprising if one day, xenon headlights became the standard, and not just the choice for motorists particular about the quality of their headlights.